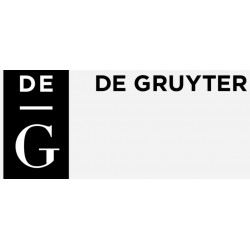 For more academic books from De Gruyter, visit the below website and contact us to place an order.

The company is headquartered in Berlin, Germany. http://www.degruyter.com/ For more than two-hundred and fifty years the name De Gruyter has been synonymous with high-quality, landmark publications in the humanities and natural sciences. The scope of our publishing program includes theology and philosophy, biology and chemistry, linguistics and literature, mathematics and physics, history and archaeology, as well as law and medicine. In all these areas de Gruyter has consistently partnered with exceptional scholars to establish itself as a key international publisher.

On May 1st, 2013, De Gruyter acquired Ontos Verlag, a publishing house devoted to analytical philosophy. The program includes 23 book series, all edited by excellent and renowned scholars in their respective areas of research, and 3 journals.

The languages of publication are English and German.

Berlin, February 26, 2013 – De Gruyter is proud to announce the acquisition of two academic publishers with a long and rich tradition: Akademie Verlag, based in Berlin, and Oldenburg Wissenschaftsverlag, based in Munich. Both companies were acquired retroactively as of 1 January 2013 from Franz Cornelsen Bildungsgruppe, which is seeking to streamline its business.

Since April 2012, De Gruyter owns the Birkhäuser architecture and design list. The takeover includes the Birkhäuser brand name. Originally founded in 1879, Birkhäuser was one of the world`s most renowned publishers for design and architecture, and is home to such influential authors and architects as Le Corbusier, Alvar Aalto, Herzog & de Meuron, and Peter Zumthor. www.birkhauser.ch

K. G. SAUR, an Imprint of De Gruyter GmbH & Co. KG, is known throughout the world as one of the leading publishers of biographical and bibliographical reference titles serving the library and academic community worldwide. Today about 3,800 titles are available in print, on CD-ROM and DVD, on microfiche, as eBooks and online. K. G. Saur’s publishing program covers a broad range of subjects, e.g. arts, music, literature, history, politics, humanities and social sciences, Jewish Studies, and library and information science. K. G. Saur is based in Munich, Germany, and maintains editorial offices in Leipzig and Osnabrück, Germany, and in Zürich, Switzerland.

MAX NIEMEYER was founded in Halle/Saale in 1870, and since 2006 has been an imprint of Walter de Gruyter Publishing; it is one of the most renowned publishers for the arts and humanities, with the main emphasis on Germanic and Romance Studies (literature and languages). The publisher’s reputation was established by Hermann Paul’s "German Dictionary", by leading journals ("Anglia", "Beiträge zur Geschichte der deutschen Sprache und Literatur" [Papers on the History of German Language and Literature], "Zeitschrift für romanische Philologie" [Journal of Romance Philology]), and by Martin Heidegger’s principal work "Sein und Zeit" [Being and Time] which has been published by Max Niemeyer since its first edition in 1927.

MOUTON DE GRUYTER is one of the leading publishers in the field of linguistics, with a particular reputation for journals, research monographs, reference works, multimedia publications, and bibliographies.

July 2018, De Gruyter has acquired the renowned publisher Düsseldorf University Press (DUP) retroactively to 1 January 2018.
Düsseldorf University Press was founded in 2008 with the objective of publishing research from Heinrich-Heine-University (HHU) in Düsseldorf, Germany and from other universities. Publications include scholarly monographs, collections and series to dissertations, Festschriften, textbooks and study materials as well as scientific guidebooks. DUP also offers early career researchers an opportunity to make their research results available to a larger spectrum of the general public.